Home » Updates » HAS gets into a BAT of a problem!

HAS gets into a BAT of a problem!

HAS recently came across an unusual problem on one of our projects in August. Works were halted when our teams came across bats within the voids of a corrugated asbestos roof.

All bat species, their breeding sites, and resting places are fully protected by UK law. They are also a European protected species.  In Britain there are 17 species, all very small and weighing under 30g. Towns and cities built by humans have destroyed much of their natural habitats, however they have successfully adapted to using man-made buildings for breeding and roosting. They take shelter in areas such as disused buildings, and during the winter months they hibernate. This means that often they are only detected in the Summer months, however even then they can often be hard to spot as they are nocturnal and active by night.

The project on a disused Café and Garage was immediately stopped after the presence of bats was reported to the site supervisor. The office was contacted immediately who in turn contacted our client.

From there a local bat expert was initiated to evaluate the presence of the bats, they have halted all work on the site for the time being.

If you are worried about the presence of bats in a property you must contact Natural England for advice as they are protected by the Wildlife and Countryside Act 1981, as amended by the EC Habitats and Species Directive 1992 (brought into force via the Habitats and Species Regulations 1994). These regulations mean that it is a criminal offence to deliberately capture, harm or kill a bat, to deliberately or recklessly disturb bats, to damage, destroy or obstruct roosts, or to be in possession of a bat. For further information on the law regarding bats in property please see the Bat Conservation Trust  and Natural England guidance 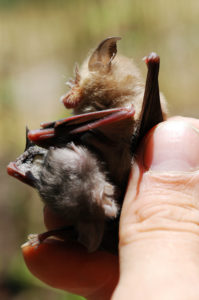 All 17 species of bats are protected by UK law.
© Salajean | Stock Free Images